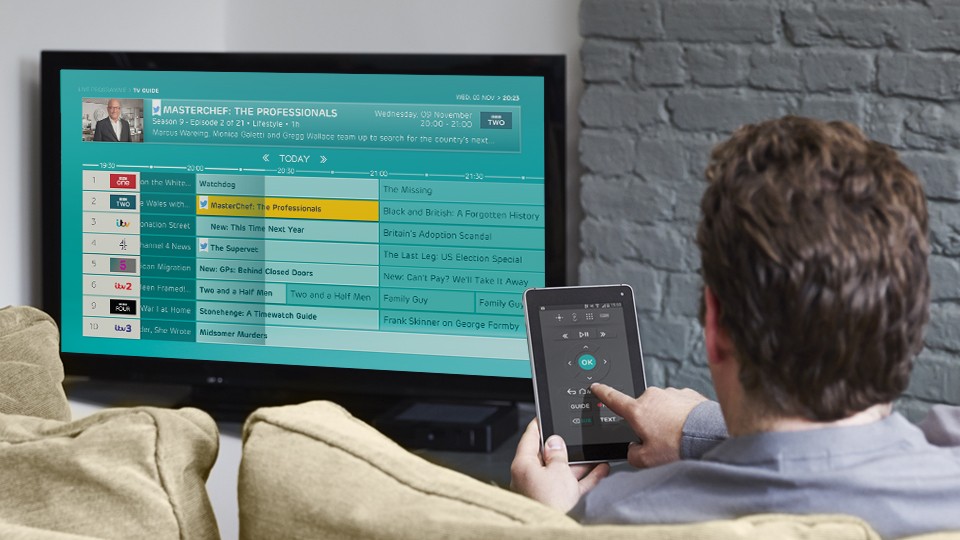 EE is unveiling a number of innovative EE TV features as well as a ground-breaking new partnership with the online news and social networking service, Twitter. Launching immediately for new and existing EE TV customers - the new functionality enhances EE TV’s position as the UK’s most advanced TV service.

EE has partnered with Twitter to be the first UK TV platform to offer ‘Watch with Twitter’ functionality. The new feature means EE TV set top box viewers can quickly and easily see which shows are trending on Twitter – allowing them to discover and watch the most talked about programmes in real time.

Using data directly from Twitter UK, up to five of the highest trending live shows are highlighted in the EE TV electronic programme guide, and throughout the EE TV interface, with the Twitter logo in real time, as well as programmes starting in the next hour. Meanwhile, in the programme view, EE TV will also include the official hashtag of major shows, so people can join in the conversation separately on Twitter. EE also plans to work with Twitter to add further Watch with Twitter functionality for EE TV customers in 2017.

Speaking on the partnership, Dara Nasr, UK Managing Director, Twitter, said: “Great telly and Twitter have always gone hand-in-hand - people love talking about their favourite shows and our new partnership with EE makes it easier than ever to discover which programmes are creating the biggest conversations."

EE is also updating its popular Replay functionality. Replay allows customers to view the last 24 hours of TV from their favourite channels – ideal for those who arrive home late or want to watch a programme not available on catch-up TV. From today, EE is increasing the number of Standard Definition channels customers can select on Replay from six to eight. Customers are also now able to refine what content is made available on Replay by programme category, with 10 options available including: Movies, Drama, Kids and Sport. This means they can quickly get to the content they want to watch.

EE is also taking 41 channels from two of its most popular apps, TVPlayer and Box Plus and making them easier to find by integrating them into the EE TV electronic programme guide– helping customers to easily discover great new shows

EE has also partnered with NBCUniversal International to introduce hayu – a next-generation reality subscription video on demand service – via an on-demand app on EE TV. With the majority of reality content added to the service on the same day it premieres in the US, the service includes over 3,000 episodes including everything from Keeping Up with the Kardashians and its spin-offs along with The Real Housewives, Million Dollar Listing and Top Chef franchises.

hayu on EETV features complete box sets that allow fans to catch up on series from the very beginning and also includes specially made short-form content snippets selected from the original episodes*. Customers can sign-up to hayu for just £3.99 per month for access. There’s no fixed-term or length contract, and EE TV customers can take advantage of a one month free trial.

Noel Hamill, Managing Director of Marketing, EE, said: “We continue to evolve the EE TV experience for new and existing customers - ensuring it’s even easier for them to discover shows they’ll love. We’re also excited to be the first TV platform in the UK to partner with Twitter on integrating its ‘Watch with Twitter’ features, meaning customers are in the loop on all the most talked about programmes. And with the addition of hayu, we’re making sure there’s plenty for those who want to keep up with the latest hit reality shows.”

The hayu app is available immediately for all new and existing customers, while “Watch with Twitter” and the enhanced Replay feature and new electronic programme guide will be rolled out to all existing customers throughout November.

*With a hayu subscription – customers can also download the separate hayu mobile app or access the hayu site via the web, to benefit from integrated news feeds and social media – offering a breakthrough, shareable user-experience. Users can also share short-form content directly via their social media accounts.

EE runs the UK's biggest and fastest mobile network, having pioneered the UK's first superfast 4G mobile service in October 2012 and was the first European operator to surpass 14 million 4G customers in December 2015. EE has more than 550 shops across the UK. EE's 4G coverage reaches 70% of the UK’s landmass, equal to more than 98% of the UK population. EE plans to extend 4G geographic coverage to 95% by 2020.