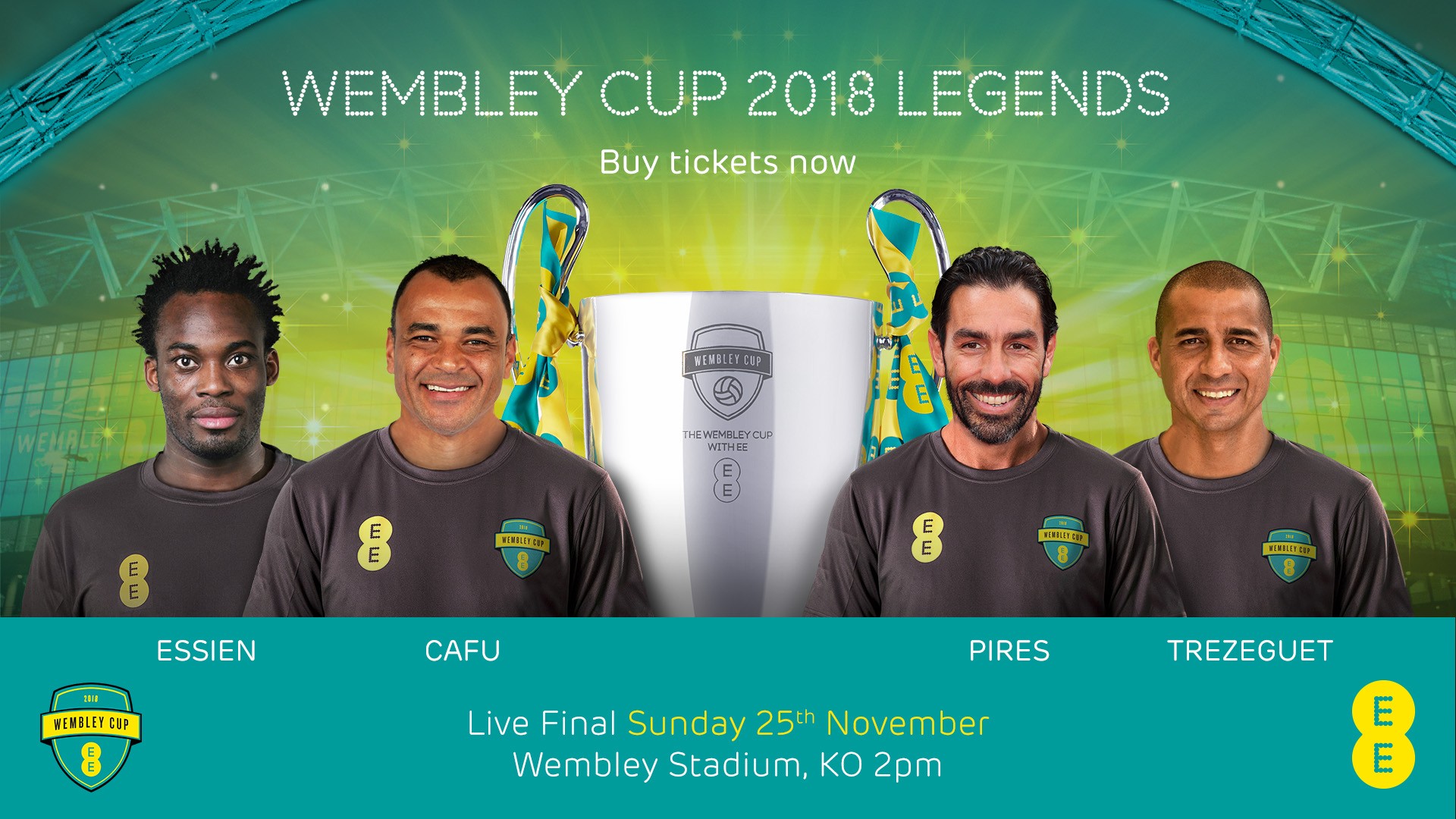 Monday 5th November 2018: EE is revealing the all-star line-up of legends that will be dusting off their boots to take part in The EE Wembley Cup 2018.

The legends will be picked to join one of the four teams as part of the new American Football inspired Draft stage before they head to Wembley Stadium to take part in the live final on Sunday November 25th.

The Draft stage is just one of the ways EE is ripping up the rulebook for this year’s EE Wembley Cup. Other new rules introduced include a fast and furious 30 minute game format, Man Down Time and Sin Bins turning the traditional footballing tournament on its head.

EE conducted research with football fans across the UK to identify the best and worst football innovations from the past 30 years, showing how technology has transformed the beautiful game.

Three quarters (74%) of the nation agree that tech innovations have heightened their football viewing pleasure, with goal line technology topping the list (58%). Almost half (47%) of all of football lovers still admit that the traditional match format could be updated for a more thrilling experience.

Further findings reveal that the technological advancements in current football tournaments have also given football fans more confidence in a fair final result (54%), helping to reduce post-match disappointment and backing for referee’s decision-making during games (67%).

A third (33%) of British football fans admit that it’s hard to beat live football stadium action, although 96% of fans still turn to technology for instant replays, match analysis or to watch an epic goal up-close.

As well as the football legends, team captains can also boost their squads with stars of YouTube’s most talked about teams in the Draft stage, with Joe Weller, Sean Garnier, Fifa Manny and Chris MD, also featuring in the exciting episode.

The first episode of The EE Wembley Cup 2018 is now live on Spencer FC’s YouTube channel and EE’s YouTube channel, culminating in a live final at Wembley Stadium connected by EE, on Sunday 25thNovember 2018 at 2pm

French footballing legend, Robert Pirès comments “Recent innovations in football have revolutionised the way we talk about and watch matches. I feel like matches have become more exciting and are packed with more action and drama as a result. It will be brilliant to play at Wembley Stadium again and it’s guaranteed to be another dramatic match at The EE Wembley Cup 2018 final. I think introducing the Draft Stage to the tournament format is a really fresh new approach to football, and Man Down Time is an exciting alternative to the penalty shootout"

Pete Jeavons, Director of Brand Marketing at EE: “The EE Wembley Cup is ripping up the rule book for 2018 with some innovative twists and a brand new tournament format. One of the most exciting additions to the series is the introduction of a Draft stage. Allowing teams to bolster their squads with World Cup winners and global legends is really going to raise the stakes for 2018. With the addition of these world class players to the stellar line up of football YouTubers, this year’s EE Wembley Cup is going to be one to remember.”

Tickets to the live final are currently available to purchase via www.ee.co.uk/wembleycup from £10 for EE customers and £15 for all other customers, with no booking fee. The event is not-for-profit, with £2 from every ticket sold being donated to Sport Relief.

The EE Wembley Cup series will celebrate the launch of an enhanced BT Sport offer - allowing customers to use their free BT Sport app access to watch the sport they love in HD on multiple devices.

New and existing EE pay monthly mobile or tablet customers who haven’t used EE’s original BT Sport offer can get three months’ free access with inclusive data, so sports fans can stream the biggest events on the move and in stunning HD without impacting their monthly data allowance. Customers who have redeemed the original offer can still benefit. They’ll be able to access all of the above for just £5 for the first three months, saving them up to £30.