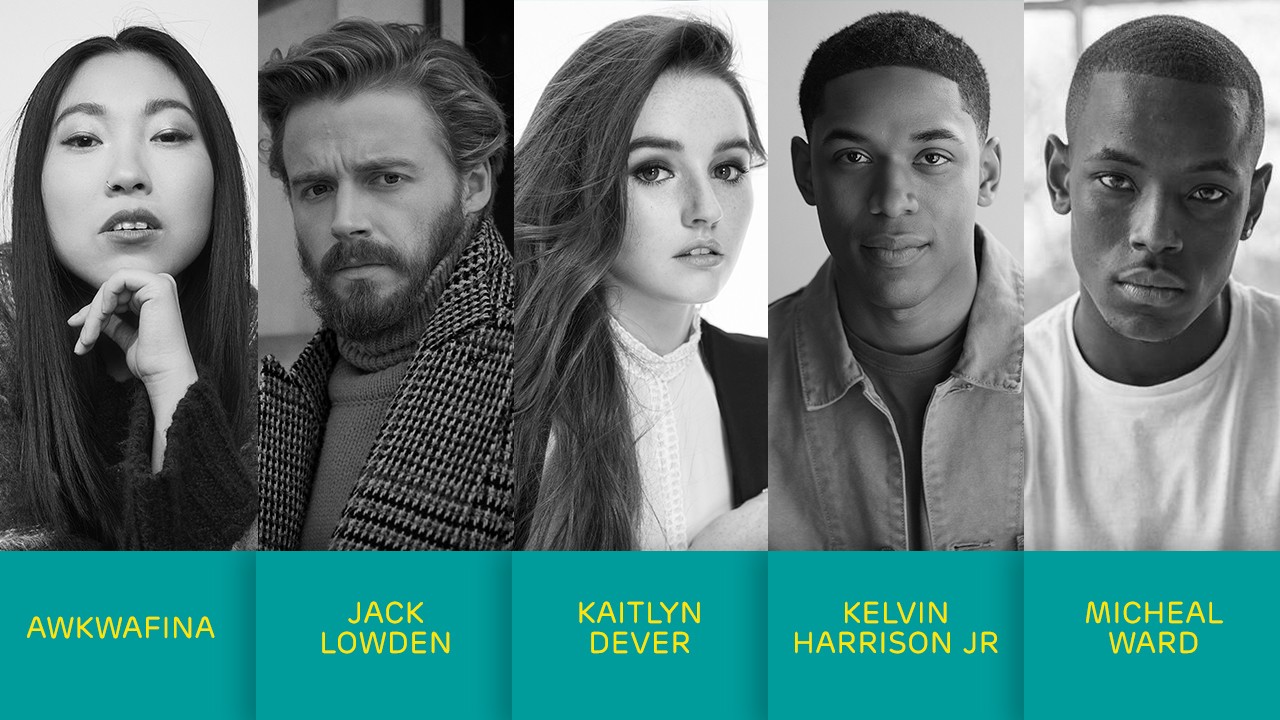 Revealed by BAFTA Chief Executive Amanda Berry, film broadcaster Edith Bowman and actor Tom Hiddleston, the nominees consist of five performers who have each shown exceptional talent on the big screen over the past 12 months and captured the imagination of both the British public and experts from across the film industry.

The EE Rising Star Award nominees for 2020 are:

Nora Lum, known professionally as AWKWAFINA, has established herself on the big screen with her lead role in The Farewell, which has already earned her a 2020 Golden Globe nomination for Best Actress. She has also had supporting roles in big hitting films including Ocean's 8, the all-female spinoff to the Ocean's Trilogy, Crazy, Rich Asians and Jumanji: The Next Level. Her other upcoming films include Breaking News in Yuba County, The Prom and a live-action adaptation of The Little Mermaid.

Awkwafina, commenting on her nomination, said: “It’s truly an honour to be nominated for the EE Rising Star Award. I’m grateful to BAFTA and the jury for the nomination and that I am able to share this recognition with so many other talented actors and actresses.”

JACK LOWDEN first received widespread acclaim in 2011 for his role in The National Theatre of Scotland’s production of Black Watch. From there, he has played a variety of diverse and dynamic roles spanning both film and theatre, firmly cementing his place as one of the UK’s most exciting young talents. His film work includes standout turns in Dunkirk, Mary Queen of Scots, Fighting With My Family and Calibre, for which he won a BAFTA Scotland award. He has also won an Olivier Award for his role in Ghosts at the Almeida Theatre. His next film roles will be in Cordivae and Fonzo, which will see him team up again with Tom Hardy. He will also be starring alongside John Boyega and Letitia Wright, both previous EE Rising Star winners, in Steve McQueen’s upcoming anthology series Small Axe.

Jack Lowden, commenting on his nomination, said: “I would like to thank both BAFTA and the jury panel for nominating me for the 2020 EE Rising Star Award. It’s a huge honour to be included amongst such talent – what a way to kick off the year. Thank you!”

KAITLYN DEVER has been praised for her lead role in Booksmart, where she was recognised by the Hollywood Critics Association as a young breakthrough artist. She has also received critical acclaim for her performance in Unbelievable, which has already earned her a 2020 Golden Globe nomination. Kaitlyn’s other notable roles have included Beautiful Boy, alongside Steve Carrell and Timothée Chalamet, and The Front Runner, opposite Hugh Jackman and Detroit, alongside former EE Rising Star winners John Boyega and Will Poulter. She is also currently in production for Monsterland, an anthology series opposite Jonathan Tucker.

Kaitlyn Dever, commenting on her nomination, said: "I am overjoyed to be recognized by BAFTA and the jury as an EE Rising Star nominee. I am so excited to be acknowledged for an award that celebrates the achievements of young talent who are also contributing to film in an impactful way. It’s so incredible to be included in the group of talent nominated today as well as those recognized as an EE Rising Star over the years. It’s quite an honour and one that I won’t ever forget.”

KELVIN HARRISON JR. was born and raised in New Orleans and initially studied jazz at the New Orleans Center for Creative Arts before realising his passion for acting. From there, he has been cast in a range of challenging and diverse roles across the big and small screen. Kelvin has been praised for his title role in Luce, starring opposite Octavia Spencer, Tim Roth and Naomi Watts, and has already garnered early Oscar buzz for his role in upcoming drama Waves. Kelvin has also received critical acclaim for his supporting role in Oscar nominated Mudbound and his performance in It Comes At Night, which earned him a Gotham Independent Film award nomination for Breakthrough Actor.

Kelvin Harrison Jr., commenting on his nomination, said: “For the last few years I’ve followed this award and the nominees have always been made up of artists whose work challenges me and inspires me. I feel honoured to be counted among them.”

MICHEAL WARD recently starred in the highly anticipated Netflix series Top Boy, which was produced by Drake and earned breakthrough star Micheal widespread acclaim throughout the UK. Micheal has also earned praise from critics for his lead role in Paramount’s Blue Story, which follows the story of two young boys from opposing postcodes who quickly form a firm friendship that is tested when they wind up on rival sides of a street war. Micheal has also starred in BBC thriller series The A List, which was released internationally on Netflix.

Micheal Ward, commenting on his nomination, said: “The last two years have been unbelievable, and now to find out that my industry has recognised my work and put me up for the EE Rising Star Award, really is the most amazing thing to happen.”

To mark the 15th anniversary of the EE Rising Star Award, EE used cutting edge technology from Nreal to offer media attending the press conference the opportunity to immerse themselves in the past fourteen years of EE BAFTA Film Awards ceremonies. Journalists were offered a glimpse into the future of how film fans will watch movies through AR technology by trying on a pair of Nreal Light mixed reality glasses. Connected to android smartphones showing previous EE Rising Star Award winners collecting their trophies, these glasses allowed journalists to watch on a huge digital screen, combining the physical and digital worlds in a brand-new way.

Edith Bowman, EE Rising Star Award juror and broadcaster, said: “Announcing this year’s nominees has been an honour and a very special experience, in my four years on the EE Rising Star jury panel, the talent never fails to inspire me. As this is the only award which is determined by the British public, it’s now up to film fans from across the country to vote for their favourite nominee, not an easy task. So, please make sure to check out each of the nominees’ films and make your vote count!”

Pete Jeavons, Marketing Communications Director at BT & EE, added: “2020 marks the 15th anniversary of the EE Rising Star Award and the nominee shortlist is stronger than ever. This year’s performances have been incredible and will undoubtedly create a difficult decision when it comes to voting for a winner. We’re incredibly proud to be able to recognise emerging film talent in partnership with BAFTA and most importantly, be able to give the public a voice to choose who the 2020 EE Rising Star Award winner will be.”

EE has been a long-standing partner of BAFTA’s Film Awards for the past 22 years, working with BAFTA to bring film fans closer to the awards through the magic of technology. Since the partnership began, EE has not only worked with BAFTA to introduce the EE Rising Star Award but also used its award-winning network to create new and exciting opportunities for film fans to be part of the action on the red carpet.

2020 is a milestone for the EE Rising Star Award, marking 15 years since the award was first presented to winner James McAvoy back in 2005. Voting is now open at ee.co.uk/BAFTA and the winner will be announced at the EE British Academy Film Awards on Sunday 2nd February 2020.

EE runs the UK's biggest and fastest mobile network, having pioneered the UK's first superfast 4G mobile service in October 2012 and was the first European operator to surpass 14 million 4G customers in December 2015. EE has more than 550 shops across the UK. EE's 4G coverage extends to more than 86% of the UK’s landmass (equal to more than 99% of the UK population) and EE has an ambition to extend 4G to 95% UK geographic coverage by 2020.

The British Academy of Film and Television Arts (BAFTA) is a world-leading independent arts charity that brings the very best work in film, games and television to public attention and supports the growth of creative talent in the UK and internationally. Through its Awards ceremonies and year-round programme of learning events and initiatives – which includes workshops, masterclasses, scholarships, lectures and mentoring schemes in the UK, USA and Asia – BAFTA identifies and celebrates excellence, discovers, inspires and nurtures new talent, and enables learning and creative collaboration. For advice and inspiration from the best creative minds in working in film, games and television, visit www.bafta.org/guru. For more, visit www.bafta.org.