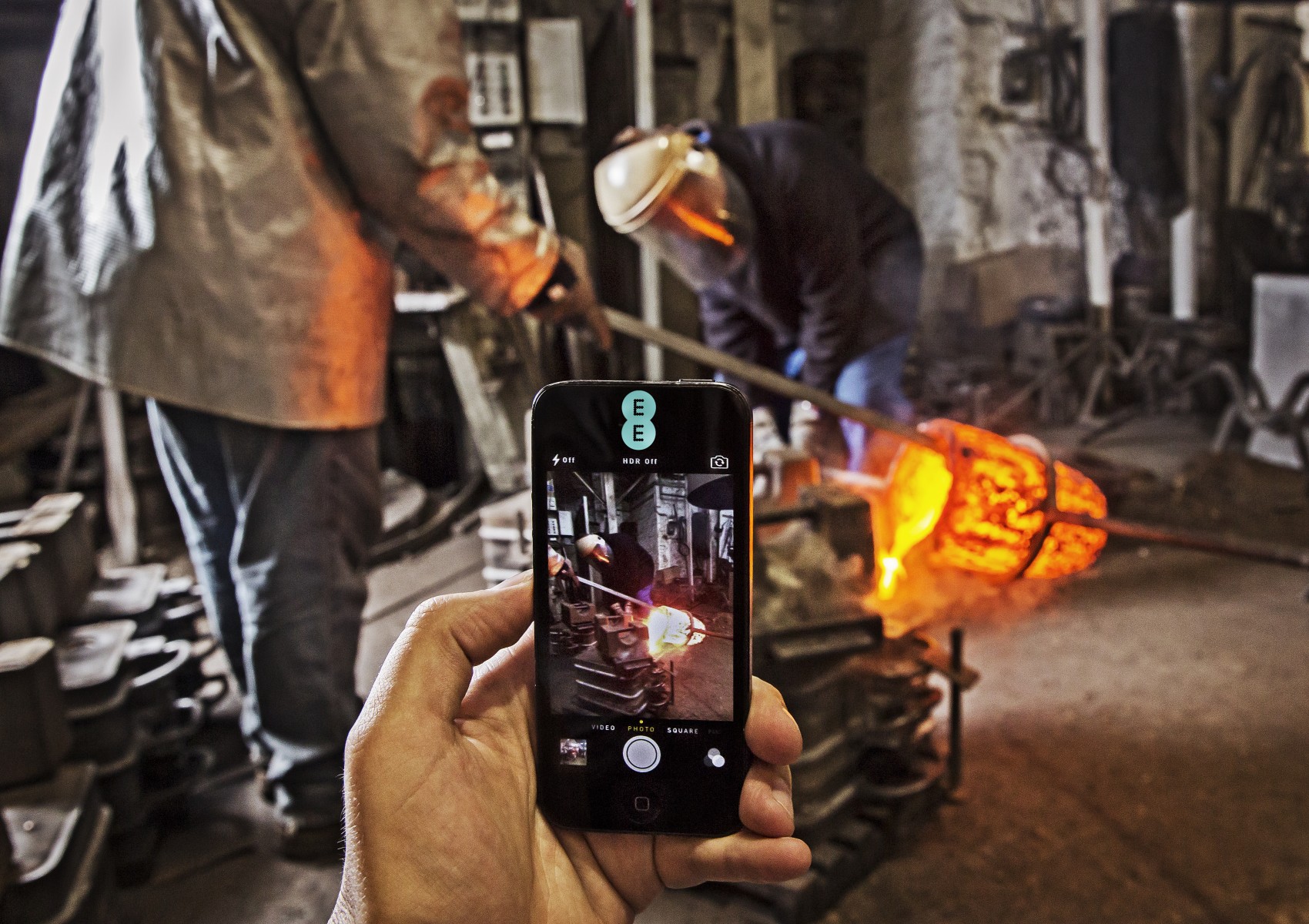 Britain's oldest manufacturing firm, Whitechapel Bell Foundry (established 1570), will help ring in the new year with 4G, using the technology to modernise its business and provide innovative new services for customers. The company has cast bells for over 400 years, and on New Years’ eve its bells will ring in St Mary’s Cathedral in Sydney, Australia, the National Cathedral in Washington DC, and London’s most famous clock tower, Big Ben.

With the help of EE, the UK’s most advanced communications company, the firm is using superfast 4G technology to upload and stream lossless audio of its bell sounds via the cloud for use in offsite sales meetings. It is also conducting live video customer service calls using 4G- enabled tablets and video conferencing apps to improve aftersales care.

Whitechapel Bell Foundry’s most recent customer – the Virginia Theological Seminary – has just completed installation of eight new bells in the tower, a process that was completed using video conferencing services over 4G. Director of Whitechapel Bell Foundry Alan Hughes – whose family have run the Foundry for more than four generations – used a video feed via a tablet to direct the installation team from his base in east London.

Working with EE’s team of experts, as part of EE’s 4GEE Pioneers program, Whitechapel Bell Foundry is using cloud-sharing platform Box to provide instant access to the sounds of our extensive range of bells in crystal clear lossless format. The company’s head office is continually uploading new audio from the expanding catalogue of bell sounds, and 4G enables sales staff to stream the most up-to-date files during client meetings. The cloud catalogue has helped the company increase sales from these meetings by at least 5% as customers are able to make a decision far more quickly.

“Customers increasingly ask to hear our bell sounds,” explains Alan Hughes, director at Whitechapel Bell Foundry. “Previously we’ve had to send CDs out by mail – and we’ll usually haul a large selection to new business meetings so we can play them to prospects. But using 4G we can now quickly browse the full catalogue and stream high quality audio files of any bell from the cloud. This helps us bring our products to life in a way that we’ve never been able to before. Thanks to EE’s help, this has had a big impact on our bottom line by boosting sales.”

The firm has also introduced a live video customer service helpline using 4G-enabled tablets and video conferencing apps.  The service allows Whitechapel Bell Foundry experts to troubleshoot and diagnose problems with bells across the UK and as far away as Adelaide, Australia in real-time, boosting customer satisfaction.  The innovation means problems are dealt with quickly and progress on casting and installing new bells does not stop while a fault is dealt with. This has helped the business streamline the problem-solving, saving money, time and travel expenses previously spent on site visits.

“As we’ve been going since 1570, many will regard Whitechapel Bell Foundry as being old-fashioned, yet we’re anything but,” said Alan Hughes. “4G has helped us modernise the way we do business, showing clients we’re at the cutting edge of technology, rather than stuck in the sixteenth century. We’re very proud of our traditions, history and achievements, but by using 4G to innovate our business processes, we’re also able to move with the times at a rapid pace.”

Whitechapel Bell Foundry is the latest company to join EE’s 4GEE Pioneers program. The initiative is aimed at boosting innovation by helping UK businesses integrate 4G into their products, services and business processes.

Mike Tomlinson, director of small business at EE, said “Whitechapel Bell Foundry is an excellent example of a business that has survived for the last 400 years by embracing change. At EE we’re seeing more of this innovative thinking from our 4G business customers as they look for new ways to outmanoeuvre the competition.

“They are transforming how they operate, using cloud services, social media and a wide range of business-focused apps and our 4G network. Even one of the UK’s oldest and most established businesses is doing everything possible to retain a competitive edge, and that’s what 4G from EE can offer. “

EE was recently awarded the Best Network for Business for the second year running at the 2014 Mobile Industry Awards. 4G from EE now covers 75% of the population, 263 major towns and cities, and over 2,500 villages and small towns.

Find out more at: http://ee.co.uk/business

Whitechapel Bell Foundry is based in the London Borough of Tower Hamlets, and is the oldest manufacturing company in Great Britain. The foundry's main business is the manufacture of church bells and their fittings and accessories, although it also provides single tolling bells, carillon bells, handbells and a range of gift bells. The foundry's premises are a Grade II* listed building. Its bells ring all over the world.

In 1752, the foundry cast a bell for the State House in Pennsylvania which later became known as the Liberty Bell. The original bell was damaged on voyage and cracked. It was recast on site using the metal from the original and is now housed near Independence Hall. Also in Philadelphia, another bell cast at Whitechapel bearing the inscription “Let Freedom Ring” and weighing 6 tons was presented as the gift of the people of Britain to the people of the United States of America in 1996 in celebration of 200 years of American Independence.

Big Ben, which tolls the hour at the Palace of Westminster, was cast by the Whitechapel Bell Foundry in 1858 and rung for the first time on 31 May 1859.  The bell weighs 13½ tons and is the largest ever cast at the foundry.

More recently in 2012, the Whitechapel Bell Foundry cast the peal of 8 change ringing bells for the Herald Barge which led the River Pageant to celebrate the Queen’s Diamond Jubilee. These Royal Jubilee Bells, each named for a  member of the Royal family, now ring out from the Church of St James Garlickhythe in the City of London. The TV coverage of the pageant made these bells the most seen and heard peal of change ringing bells in the world.

4GEE Pioneers is EE’s programme aimed at boosting 4G innovation amongst the UK’s most exciting businesses. EE provides these businesses with specialist consultancy so the program participants receive the best advice on realising the potential of 4G. In addition to Whitechapel Bell Foundry, other 4GEE Pioneers include:

1.       Luxury Mobile Office – the UK’s first fully connected luxury office on wheels, founded by Mark Strachan. The Luxury Mobile Office – a converted Mercedes Viano – is fitted with a Huawei double speed router provided by EE. It uses 60 Mbps 4G to enable business executives to do everything from conducting international video conference calls on the move, to downloading large files from the cloud.

2.       Anthony Sinclair – the tailor behind Sean Connery’s suits when he played James Bond, led by enigmatic entrepreneur David Mason. He has now uploaded his entire fabric library to Dropbox, the online storage app, taking advantage of download speeds of up to 60Mbps – 10 times faster than traditional fixed line broadband. This enables him to show his full collection off to clients at the touch of a button, where previously having to predict the styles his client would be interested in caused David to lose up to one in five sales.

3.       The Rib Man – award-winning London-based street food seller and producer of a range of infamous hot sauces, Mark Gevaux. Mark relies heavily on social media to promote his business and uses 4G to stream videos and photos of his food being made on Twitter, Vine and Instagram. Using 4G he can now accept BitCoin payments and process online orders via PayPal, enabling him to fulfil all orders and payments while on the move, freeing him up for an extra day per week to spend on growing the business.