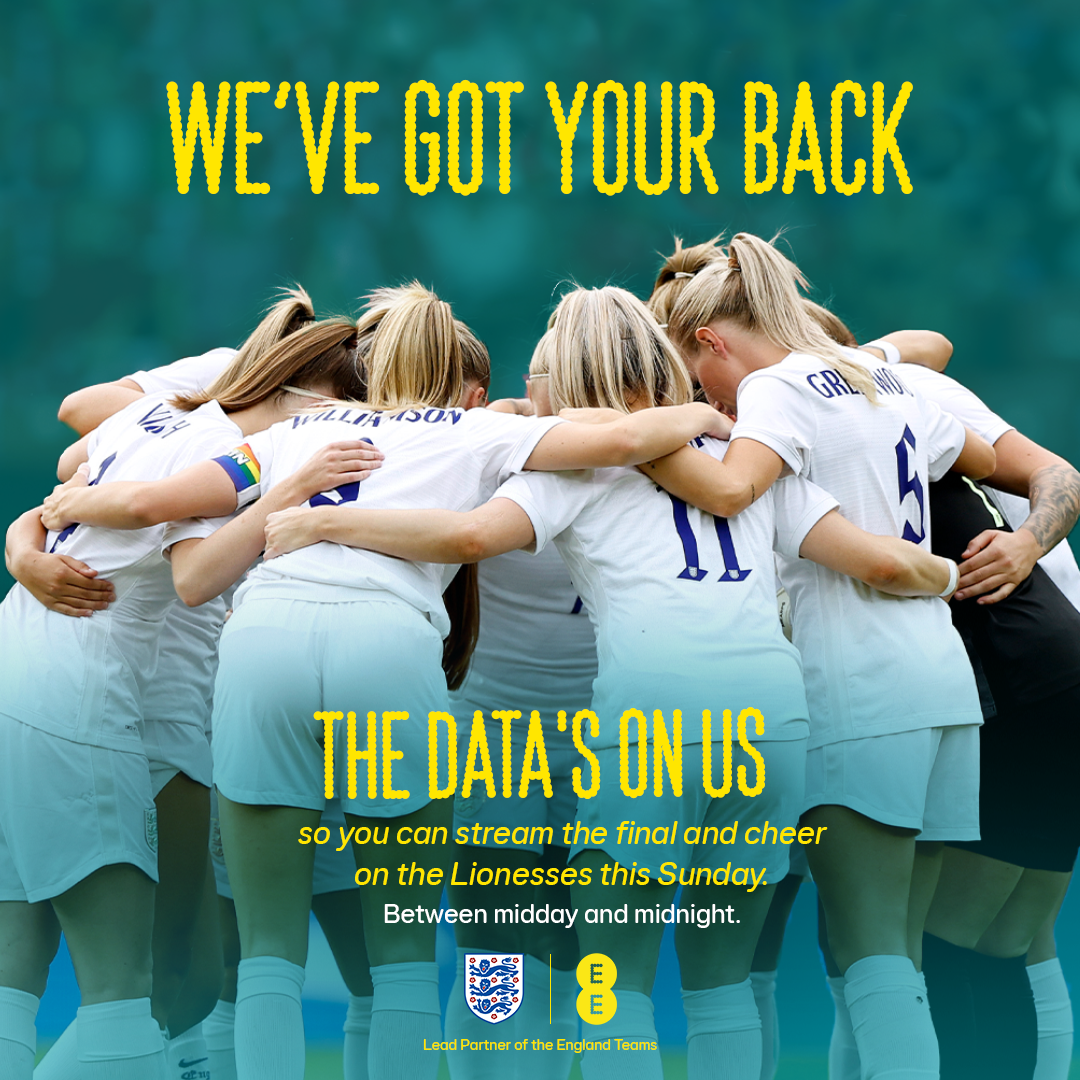 29 July 2022, London: The UK’s best network, EE, is zero-rating data across its mobile network this Sunday so football fans don’t miss a moment of the Women’s England vs. Germany UEFA European Championships final.

As the Lionesses take on their biggest moment yet, EE and BT Mobile customers, including EE SME customers, will enjoy free data from 12 noon-midnight on Sunday 31st July to stay connected, whether that’s to stream the game, message their friends or share their predictions.

Marc Allera, CEO of EE: “As proud lead partner of the England Women’s team, we’ll be cheering on the Lionesses alongside millions of fans across the country – whether they’re at home, out and about, or even at Wembley.

“We know emotions will be running high and the last thing anyone wants to worry over is their data running out. So, on Sunday evening, customers will be able count on our award-winning network to stream every kick, capture every moment and share every roar when, fingers crossed, the Lionesses bring it home!”

If customers have already used up their data allowance, they’ll be able to access data at no additional charge, so they don't miss out. Further details here ee.co.uk/football-final.

Earlier this month, EE unveiled its Hope United squad, a team of footballers committed to combatting online sexist hate ahead of this summer’s UEFA Women's European Championships with a series of digital skills focused learning how to take a stand against online hate.

EE Hope United brought together professional footballers to highlight the positive impact men can have by becoming allies to women during the Euros this summer, encouraging them to own and challenge the problem of sexist abuse when they see it online and elsewhere.

The England Lion’s head coach Gareth Southgate delivered an emotive appeal to men across the UK, asking them to stand together in supporting women this summer and beyond, and encouraging them to become upstanders as opposed to bystanders.

EE runs the UK's biggest and fastest mobile network, offering superfast connections in more places than any other operator. EE brought the first 4G network to the UK in October 2012 and launched the UK’s first 5G network in May 2019.

EE is committed to being number one for service in the industry and has nearly 600 shops across the UK. EE remains the only mobile provider to answer 100% of customer calls in the UK and Ireland and was recognised as the UK’s Best Large Contact Centre by the UK Customer Experience Awards 2018 and Welsh Contact Centre Awards 2019. EE was awarded The Sunday Times’ Best 100 Companies to Work for in 2018 and 2019, as well as being named Best Employer 2018 by the European Contact Centre & Customer Service awards.