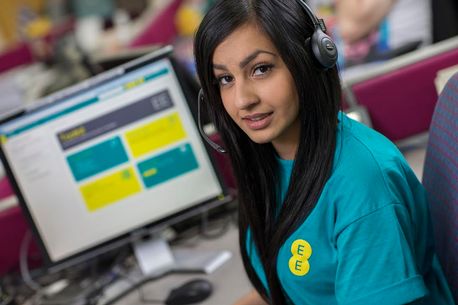 EE, recently ranked in the top 10 big companies in The Sunday Times Best Place to Work awards and the best large technology employer, is holding a recruitment fair which will see 138 new customer service and sales roles up for grabs at its site in Merthyr Tydfil.

EE will be opening its doors to prospective employees on Tuesday, 22 March to showcase the opportunities available to local residents and speak to interested applicants. The roles build on EE’s long-term commitment to supporting job creation in the area. It also marks its dedication to continuing to improve the level of service it provides its customers, as part of its drive to become the Number One for Service in the industry.

The roles will commence between March and September 2016 and give applicants the chance to become a member of the EE team and develop new skills. The positions will also offer candidates great opportunities to grow and progress within the business. Over the many years EE has resided in the area, a number of staff who joined the site at an entry level have gone on to experience great success.

Saima Tabassum,­­­­ Customer Service Representative, said: “I began my EE career as an apprentice in May 2014, completing the scheme in September, and found it really rewarding to be part of a team that actively encouraged career development.  After becoming an ambassador for ‘apprentices in the local community’ at Golley Slater, I was then elected as the youngest Local Exchange Carrier representative in Merthyr, something I’m extremely proud of. My colleagues have always offered great support and guidance, which is just one the reasons I have stayed and continued to progress at the company. It’s an exciting, fast-paced industry to be in and I’m really looking forward to my future here – hopefully it will be a long one.”

Patrick Bradley, HR Director at EE, said: “We’re proud to be creating new jobs in our Merthyr site and of EE’s role in combating unemployment in the area. This recruitment fair gives us an opportunity to see what exciting, new talent Merthyr has to offer, and to expand one of our key teams that is helping to provide the best possible service to our customers across the UK.”

Gerald Jones, MP for Merthyr Tydfil, added: “I’m thrilled EE has chosen to create 138 new jobs here. We’re very lucky to have an employer like EE in the constituency, which has been here in one form or another for over 16 years, and it’s a huge investment of confidence in Merthyr Tydfil.

“We know that the area has one of the lowest employment rates in the country, but as EE’s investment shows, it’s also home to some of the best and brightest. It’s great to see that people here, and in the neighbouring areas, will be able to get a foot on the career ladder.”

About EE
EE, part of the BT Group, is the largest and most advanced mobile communications company in Britain, delivering mobile and fixed communications services to consumers and businesses. EE has approximately 14,000 employees and 550 retail stores, and serves more than 31 million connections across its mobile, fixed and wholesale networks.