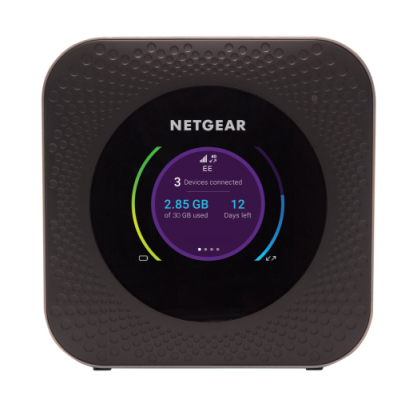 EE, part of BT Group, today announced the exclusive launch of the NETGEAR Nighthawk M1 – the latest addition to its range of 4G WiFi devices.

EE is the only UK operator to provide the advanced 4G+ network speeds that can deliver the full capability of the Nighthawk M1’s ‘Cat 16’ specification. EE started offering these speeds earlier this summer in London’s Tech City and Cardiff, and they are being rolled out across Birmingham, Manchester and Edinburgh. This summer, EE demonstrated real world 4G+ speeds of 429Mbps in Cardiff city centre using a ‘Cat 16’ smartphone, and the NETGEAR Nighthawk M1 is the first 4G WiFi device able to access these speeds.

EE also has the biggest 4G+ network in the UK, providing faster 4G speeds across more than 150 towns and cities.

Capable of connecting up to 20 devices over superfast WiFi, the NETGEAR Nighthawk M1 is perfect for users who like to multi-task online or wish to share their connection. Customers can download their favourite show from Netflix on their tablet, while streaming a UEFA Champion’s League match via BT Sport on their laptop, and simultaneously posting about the game on Facebook, all without compromising network speeds.

Customers can also connect a USB drive, external hard drive or microSD card to turn the Nighthawk M1 into an on-the-go media hub for streaming films and TV shows to multiple connected devices.

The Nighthawk M1 features a data usage meter, enabling customers to simply monitor their data, and with a 5040mAh battery, the device can charge mobile devices through the integrated USB port. The NETGEAR Nighthawk M1 can be controlled via an intuitive app, complete with parental controls.

Sharon Meadows, Director of Devices, EE said: “Not only do we offer the UK’s biggest 4G network, we’re also able to offer our customers the fastest mobile upload and download speeds with more capacity than any other network. So only on EE will customers be able to get the most out of the blisteringly fast speeds and advanced capabilities the NETGEAR Nighthawk M1 provides.”

“NETGEAR is delighted to be working with EE to provide its customers with the new Nighthawk M1 4G mobile router, said David Henry, Senior Vice President of Connected Home Products for NETGEAR. This new category of mobile routers is destined to be an essential tool for those that need to provide superfast 4G WiFi to a number of devices.”

On both these plans, customers are able to benefit from data caps – so they never go over their data allowance by accident, as well as UK & Ireland call centre support.

Review devices are available on request

EE runs the UK's biggest and fastest mobile network, having pioneered the UK's first superfast 4G mobile service in October 2012 and was the first European operator to surpass 14 million 4G customers in December 2015. EE has more than 550 shops across the UK. EE's 4G coverage extends to more than 85% of the UK’s landmass (equal to more than 99% of the UK population) and EE has an ambition to extend 4G to 95% UK geographic coverage by 2020.