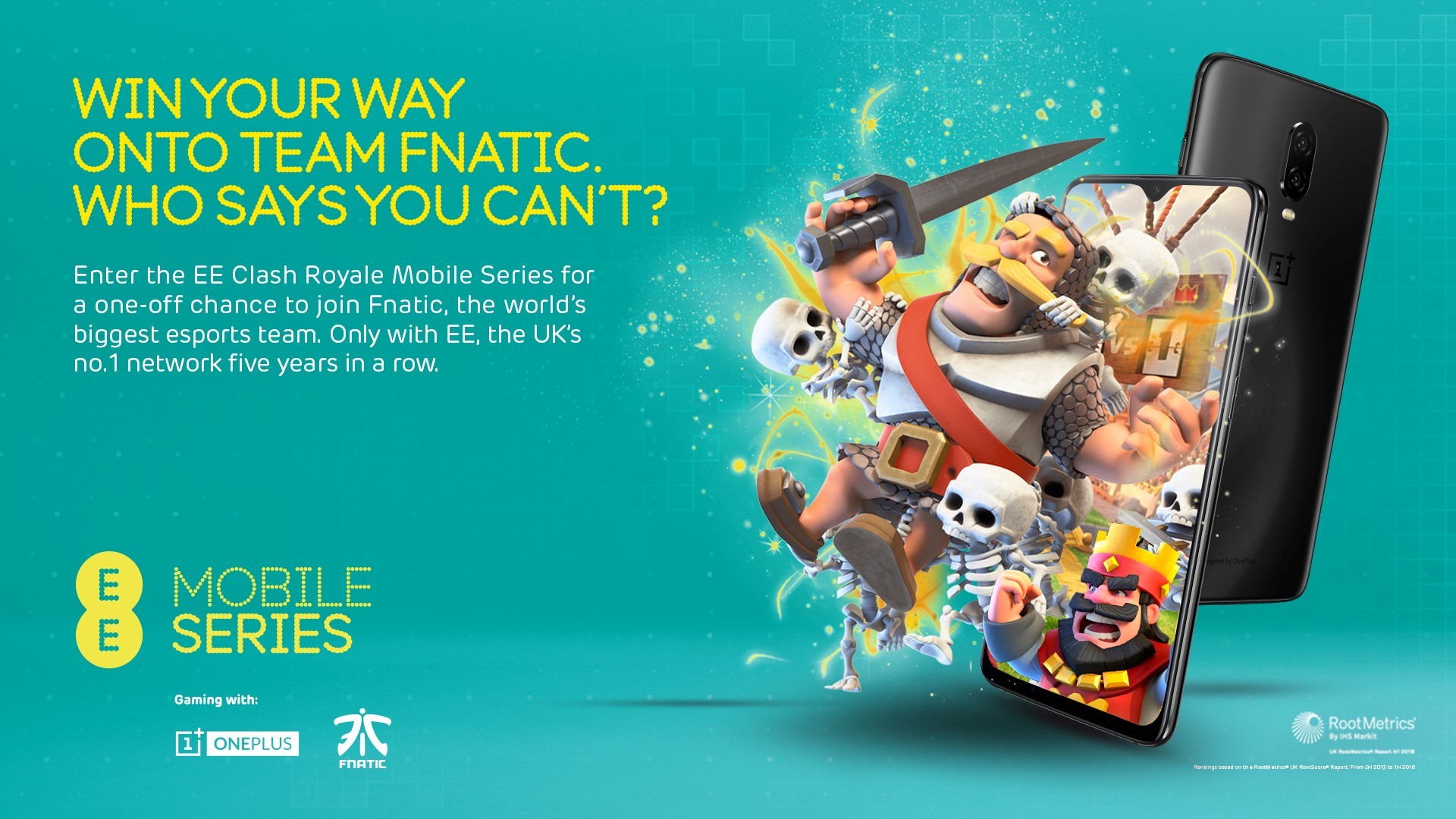 Wednesday 14th November 2018: EE, today announced the launch of The EE Mobile Series - a pioneering mobile gaming tournament, offering avid gamers the chance to compete for the ultimate prize in gaming - to become a fully-fledged team member of one of the world’s biggest and most successful esports teams, Fnatic.

The new competition from EE, the UK’s largest and most advanced mobile operator, will feature three exciting stages of action-packed gaming, culminating in a stunning eight-player Live Final, at the BT Sport studio in London on Sunday 20th January 2019.

Aspiring competitive gamers across the UK are invited to the enter The EE Mobile Series by visiting Battlefy.com/ee-mobile-series where their journey to clinch a coveted spot on team Fnatic will begin with two Open Qualifiers (27th and 29th November).

The EE Mobile Series Group Stages and Final will be broadcast live on Twitch and other major streaming platforms, so esports enthusiasts can tune in to the action.

Renowned as a leader and innovator of the global professional esports industry, Fnatic continues to lead the way and are widely recognised as instrumental in shaping this new world sport into the rapidly-growing phenomenon that it is today. Since 2004, Fnatic has competed in every major esports gaming title and platform, establishing itself as one of the most successful Western teams in history.

For the inaugural tournament, EE is challenging aspiring pro gamers to lead their Royale Family to victory in the popular universe of Clash Royale - the real-time, head-to-head battle selected as the official mobile game for The EE Mobile Series.

The latest phone from OnePlus, OnePlus 6T, will feature throughout the mobile gaming tournament, including the live Final, where each skilled finalist will be exclusively gifted the handset. The state-of-the-art device, designed with the mobile gamer in mind which features a bespoke Gaming Mode, is available now on EE’s award-winning network from EE stores, over the phone and from ee.co.uk/OnePlus.

The victorious contender, who will be crowned the first-ever Champion of The EE Mobile Series, will join the talented Fnatic Clash Royale team roster where they will become a fully-fledged professional esports player. The winning player will receive a full-time competitive salary, world-class training and their own gaming set-up to ensure they have all the tools needed to significantly improve their game by training with the best in the world. They’ll live like a pro with the rest of the team at the Fnatic gaming house.

Represented by a crew of pro players from all around the world, each with a different competitive background to the next, the Fnatic team comprises of players with international recognition, including zTeemper and Dion, and new kids on the block like Asuchini and Lemon Te.

Pete Jeavons, Director of Brand Marketing at EE: “A strong and reliable mobile connection is critical for mobile gamers, and with superfast 4G in more places than any other operator, EE is committed to providing an awesome gaming experience wherever our customers go. We’ve partnered with OnePlus and esports pioneer, Fnatic, to create the ultimate mobile gaming competition – The EE Mobile Series – offering one avid gamer the chance of a lifetime to join the Fnatic team. Who says you can’t use your smartphone and our superfast 4G network to win a spot on one of the world’s best esports teams?”

Wouter Sleijffers, CEO, Fnatic: “We’re excited to have found a partner in EE who are as passionate about esports and entertaining new audiences as we are. Fnatic are more than just a team: our mission is to bring esports into every household and our exclusive partnership with EE for The EE Mobile Series is a big step towards this ambition. EE is a forward-thinking brand that it committed to ensuring avid gamers have the best experience on mobile, so this was a natural partnership for us. We look forward to welcoming the winner of Series into our family and helping them to live their dream of becoming a professional esports player.”

Carl Pei, Co-founder of OnePlus, said: “The OnePlus 6T device is fast and smooth, and perfect for gaming. With a rich and immersive display, gaming mode, fast charge and smart boost, we’ve worked hard to deliver a powerful gaming experience. Pairing the best hardware and the superfast EE 4G network, makes for an unbeatable package - there’s never been a better time for mobile gaming.”

For more information on The EE Mobile Series, please contact the PR team at

Fnatic is a leading, global esports organization with professional teams and unrivalled legacy in some of the most popular competitive games, including League of Legends.