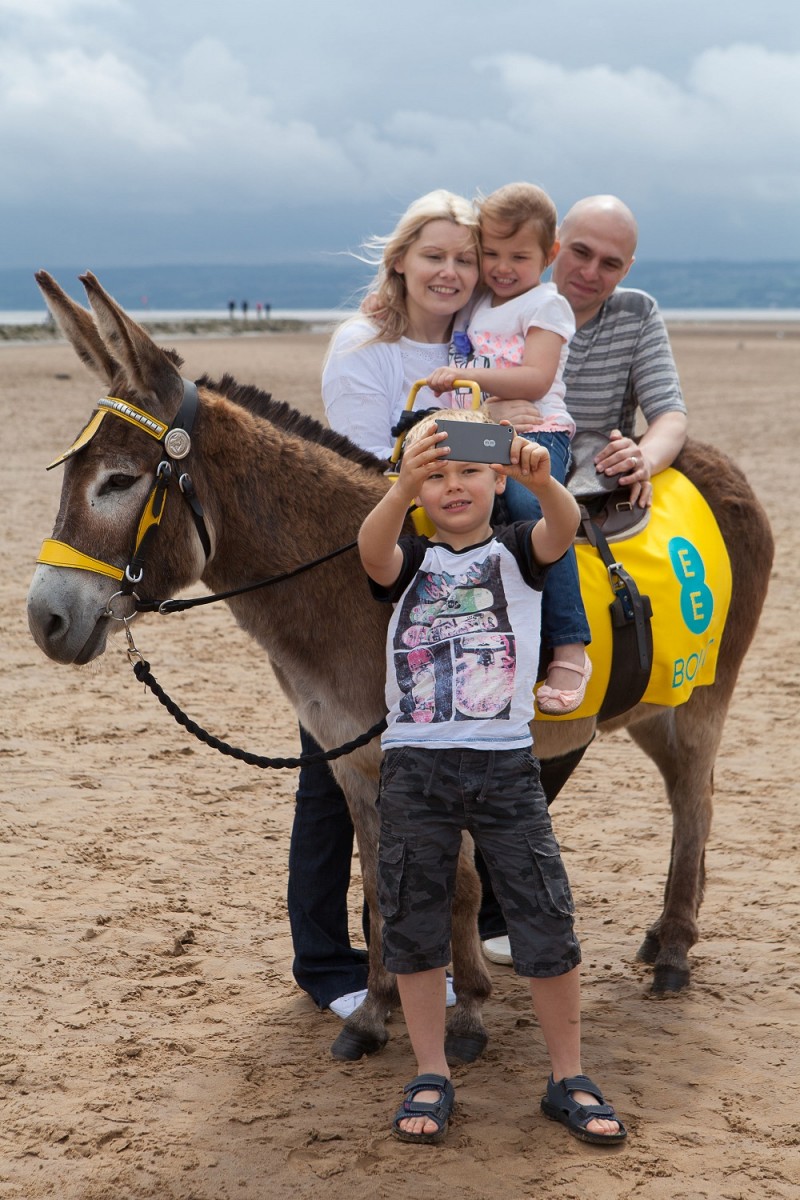 • The launch is part of the continued rollout of EE 4G which sees 15 more towns get 4G – from Gateshead to Newtownards – and takes the total to 215 large towns and cities, and an additional 2,588 villages and small towns

Friday June 6, 2014 – EE is celebrating its continued 4G network rollout by pioneering the UK’s first 4G powered donkey rides. Free ‘superfast’ donkey rides will be available to the public on Saturday 7th June at West Kirby beach to mark the arrival of 4G in the area. The seaside launch brings 4G to a total of 215 large towns and cities, and an additional 2,588 villages and small towns and villages – reaching 72% of the UK population.

Donkey rides have been an iconic attraction on British seaside beaches since Victorian times, and now a pack of Wirral’s finest donkeys will be making history of their own. Bolt, Zip, Lightning and Flash will be kitted out with new ‘superfast’ 4G WiFi technology in their saddles – turning them into 4G WiFi hotspots for the day.

The modern day take on the traditional donkey ride will mean that mums and dads can connect to the donkeys with a smartphone or tablet device, and upload pictures and videos of their kids enjoying a donkey ride in record time, instantly sharing the moment with friends and family.

Pippa Dunn, Chief Marketing Officer at EE, said: “4G is changing the way we behave and there is an increased appetite for sharing those magic moments on-the-go. EE is bringing 4G to more regions across the UK than ever before and with summer just around the corner, we wanted to make the ‘best of British’ even better. It’s great for everyone to be able to stay connected all the time, even in more remote spots like on the beach.”

EE celebrates bringing 4G to 215 towns and cities by offering free 4G-connected donkey rides this Saturday on West Kirby Beach in The Wirral, one of the latest areas to get connected by EE’s superfast network.

EE celebrates bringing 4G to 215 towns and cities by offering free 4G-connected donkey rides this Saturday on West Kirby Beach in The Wirral – one of the latest areas to get connected by EE. The donkeys saddles will be installed with the latest 4G WiFi technology so that parents can upload and share pictures and videos of the experience in superfast time. This latest roll-out sees EE now cover 72% of the population, including 2,588 small villages and towns across the UK.  For more information visit ee.co.uk