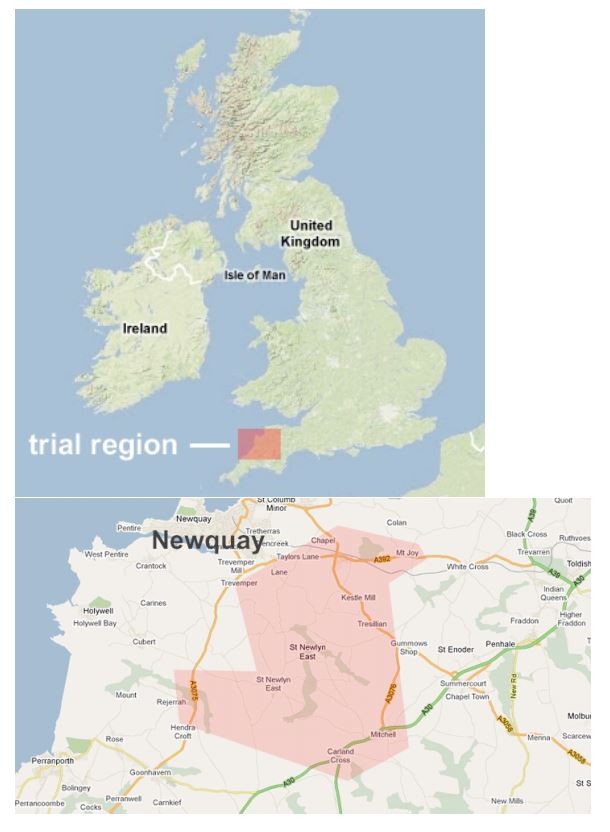 Everything Everywhere and BT Wholesale have today announced a collaboration that will see the first live trial of next generation 4G LTE¹ high speed broadband to customers. The live proof of concept trial is the first of its kind in the UK and will see the two companies sharing their fixed telecommunications and mobile technology to provide high speed wireless broadband to customers in rural Cornwall.

An initial test at BT's laboratories at Adastral Park in Suffolk is already underway, with the field trial set to test realistic 4G broadband data speeds outside of laboratory conditions. The field trial will start this September and run to early next year, involving up to 100 mobile and 100 fixed line customers living around the St Newlyn East area of South Newquay, Cornwall. Both the laboratory and live field phases will test the application of 4G LTE as a shared fixed and mobile platform.

The trial will take place at test sites south of Newquay in Cornwall, providing a combined coverage area of 25 square kilometres, with approximately 700 premises which have no or limited access to broadband services today. Everything Everywhere will also look to test 4G enabled mobile handsets and broadband dongles as part of the trial.

Residents in the St Newlyn East and surrounding areas who wish to learn more or who may want to participate in the trial can register their interest at www.4Gwirelessbroadbandtrial.co.uk. The trial will be free of charge to all triallists, and is being implemented with support from technology partners Nokia Siemens Networks and Huawei.  The Cornwall Development Company is also supporting the trial.

Tom Alexander, CEO, Everything Everywhere, said:  "Our ambition is to have the best 4G network and be pioneers in enabling Britain's superfast wireless future.

"We strongly believe that, by sharing our network and mobile assets in this way, we can make a valuable contribution to the economics of rural broadband services. Our work with BT is providing a test bed for new technologies such as 4G LTE which, with the correct allocation of sub 1GHz spectrum from the Government, has the potential to make a real impact on the way in which we communicate in the future. The Government has previously stated its desire for the UK to have the best in class superfast broadband network in Europe by 2015, and we hope to help this vision become a reality."

Sally Davis, CEO of BT Wholesale, said: "BT is committed to bringing the highest speed broadband to everyone in the UK, whether that’s over fibre, copper or airwaves. This is a great mixed economy example of innovation and collaboration by two organisations pushing the boundaries of technology for the benefit of customers. The expectation of what we will learn is truly exciting, as much for the customers who are unable to get a broadband service in a number of rural communities across the country."

Notes to editors
1 LTE, which stands for Long Term Evolution technology is a fourth-generation (4G) telecommunication technology that can reach download speeds of more than 100 megabits per second
Contacts:

Everything Everywhere Press office:
Everything.everywhere@golinharris.com or 0870 373 1500

BT is one of the world's leading providers of communications solutions and services operating in more than 170 countries. Its principal activities include the provision of networked IT services globally; local, national and international telecommunications services to our customers for use at home, at work and on the move; broadband and internet products and services and converged fixed/mobile products and services. BT consists principally of four lines of business: BT Global Services, Openreach, BT Retail and BT Wholesale.
In the year ended 31 March 2011, BT Group’s revenue was £20,076 million.

British Telecommunications plc (BT) is a wholly-owned subsidiary of BT Group plc and encompasses virtually all businesses and assets of the BT Group. BT Group plc is listed on stock exchanges in London and New York.
For more information, visit www.bt.com/aboutbt