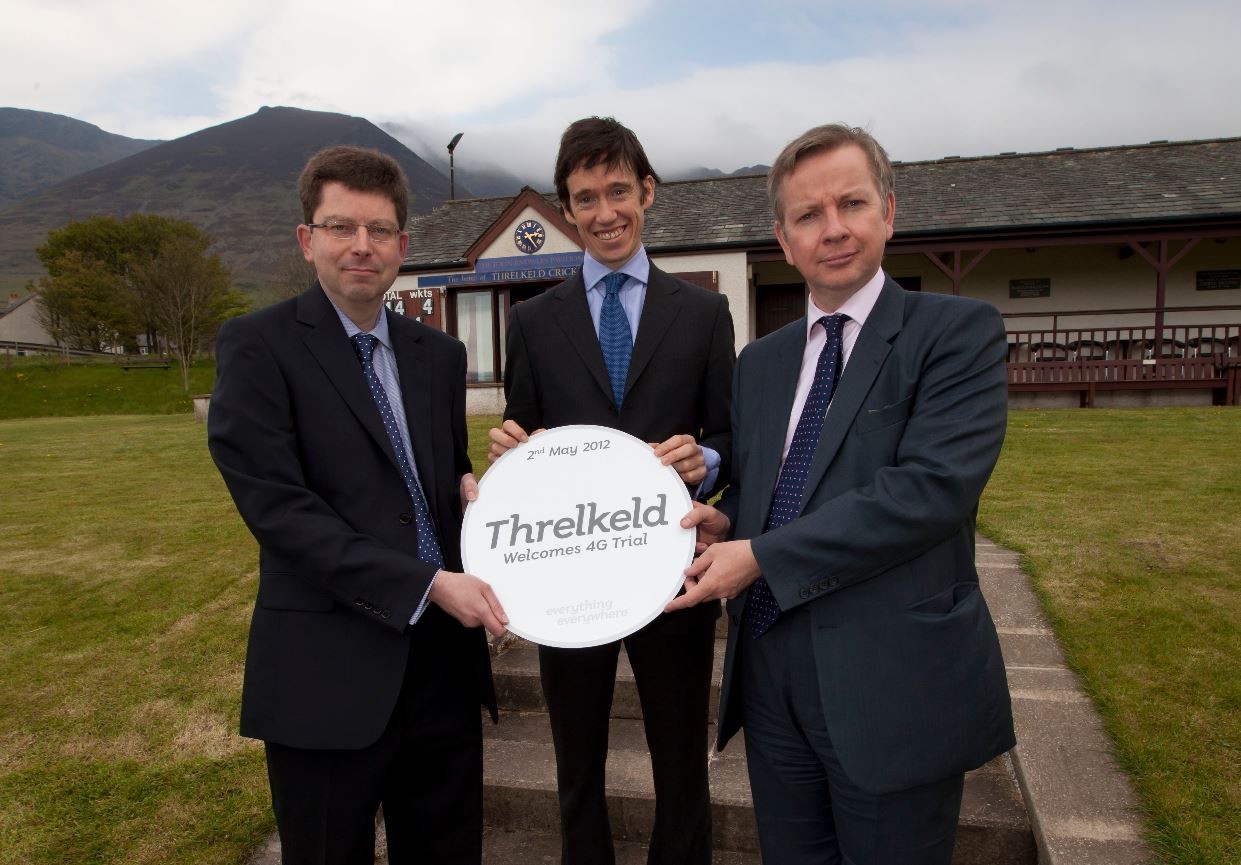 Everything Everywhere, the UK’s biggest communications company that runs the Orange and T-Mobile brands, today launched the UK’s first live 4G trial in the North of England on airwaves that, subject to licensing changes, could be used to bring 4G mobile services to the UK later this year.

The trial was switched on by the Secretary of State for Education, Michael Gove, and local MP, Rory Stewart, who said that 4G has the potential to provide “an important stimulus for the UK”. It centres on the area of Threlkeld in Cumbria, home to Blencathra, one of the Lake District’s most visited peaks.

Michael Gove met pupils in year 10 and 11 from Queen Elizabeth Grammar School, Penrith and observed them doing foreign language homework online. Schools now expect pupils to carry out online learning tasks as part of their homework, but those who live in remote, rural Cumbria rarely have sufficient broadband. 4G will solve this problem.

The Education Secretary was also shown a new police communications device, which can operate over a wireless network, allowing more policemen to be on the street, by Chief Constable, Stuart Hyde; heard from the Managing-Director of Cumbria Health on Call, Susan Blakemore, about the importance of mobile devices for health; and from Mountain Rescue, and local residents about the importance of high-speed connectivity in rural areas.

Rolling out over the next few weeks, the trial for up to 50 local residents will run until the end of July and is being conducted to test the network performance ahead of potential further roll out by the end of the year, subject to regulatory approval.

The trial service will run over existing 1800 MHz spectrum used by the Orange and T-Mobile mobile networks and will provide learnings on the performance of 4G LTE in rural areas.

Commenting on the trial, the Secretary of State for Education, Michael Gove said: ‘I’m really delighted to be switching on the first ever deployment of this cutting-edge technology in the North of England. Cumbria has – thanks to the work of local MP Rory Stewart – been at the vanguard of this work. Cumbria has unique needs due to its sparse population and long distances, which 4G LTE will help overcome. Cumbria’s schools and educational opportunities will be revolutionised by this technology. Cumbria’s record number of small businesses will be transformed by this next generation technology. 4G will bring jobs to rural areas and all the benefits of superfast broadband in education and health to its remote communities.”

Mr Stewart said: “This is a great day for Cumbria. The Education Secretary has listened carefully to the needs of Northern rural areas. It’s been a long path from parliamentary debates to community campaigns up and down Cumbria and we’ve still got a way to go. But I’m so proud of what Cumbrians have done to make this possible, deeply grateful that the Cabinet is so focused on Cumbria, and that great national companies like Everything Everywhere are choosing Cumbria as the location for their technology pilots. Many of the problems we face with our businesses, health, and council services are problems of distance. The latest technology allows us to jump those barriers and prove that rural areas can be national vanguards.”

Olaf Swantee, CEO of Everything Everywhere, said: “New independent research shows that one in five households in Britain could depend on 4G for superfast broadband in the coming years. Britain deserves a 21st century digital infrastructure, and we’re committed to making that a reality for the nation as soon as possible”.

Everything Everywhere is the UK’s largest communications company, providing mobile and fixed-broadband communications services to more than 27 million customers through the Orange and T-Mobile brands. It has invested over £15 billion since 2000 building Britain’s biggest mobile networks, and plans to invest over £1.5bn in the next three years to further improve its network and introduce fast 4G LTE mobile broadband services. Recognised for award-winning customer service, Everything Everywhere employs more than 15,000 people and operates over 720 retail stores across the UK. It has revenues equivalent to a FTSE 40 company and is backed by two of the world’s leading global communications groups, Deutsche Telekom and France Telecom, who are equal owners.