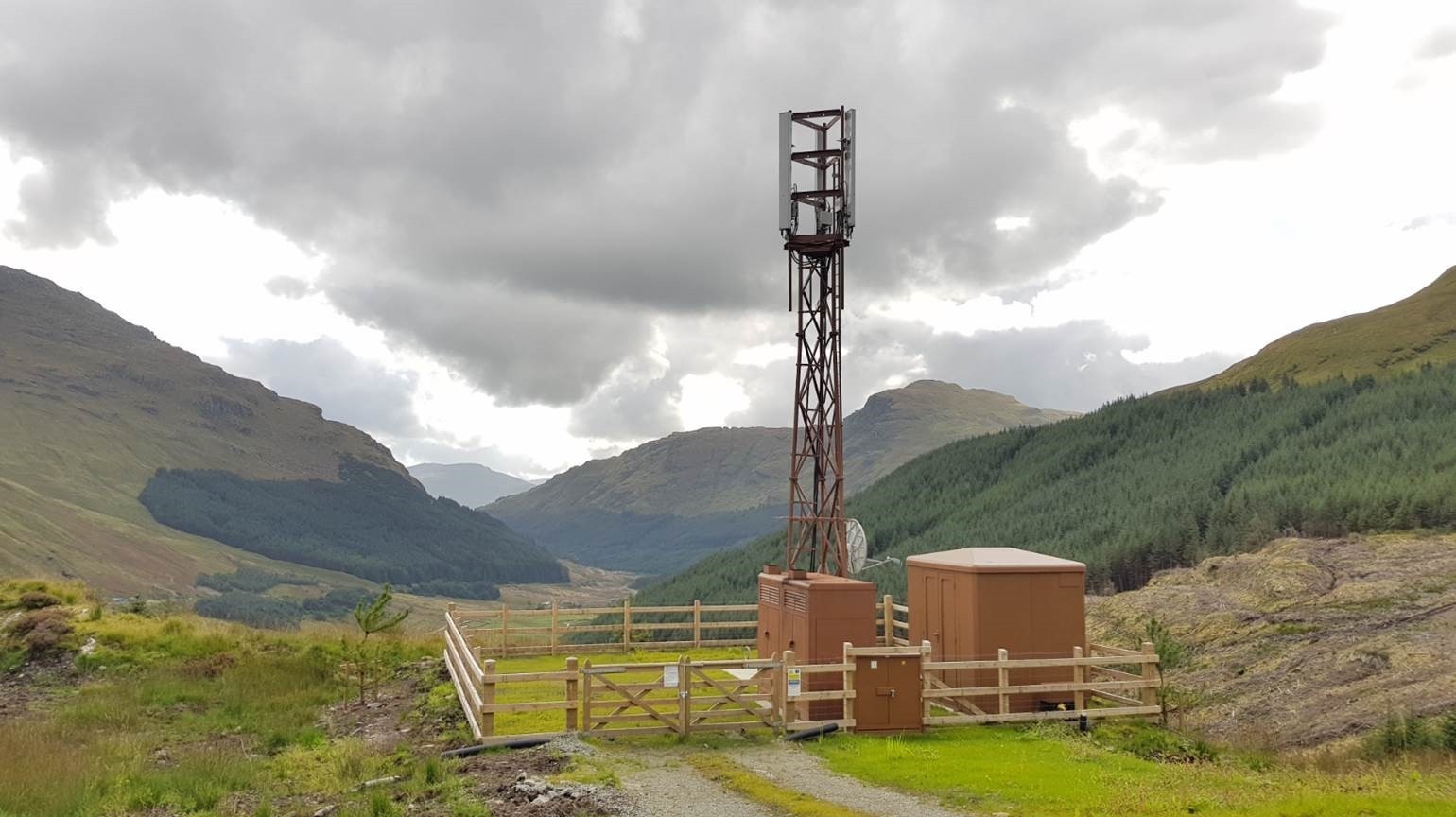 4G coverage in rural areas of Scotland is now at record levels thanks to a big boost in recent years in the number of new masts.

EE, the UK’s largest mobile operator and part of BT Group, has revealed today that it has switched on 2,300 4G sites across Scotland since 2012, bringing coverage to areas which had no mobile coverage before.

In Argyll and Bute, for example, 58 new 4G sites have been switched on since 2017. More than 80 new sites are planned for the area, with 24 due to be switched on, and eight awaiting planning consent.

As a result of the new mast builds, 69% of rural areas across Scotland can now receive a 4G service from EE.

In order to bring 4G to more places, EE has switched on its low-frequency 800MHz signal – which improves indoor mobile coverage – in around 800 sites across Scotland. This lower frequency signal has filled in large areas that were previously 4G ‘not spots’.

The improved 4G coverage also allows people in areas struggling with slow home broadband speeds – or those not able to get fixed broadband installed – to get home broadband via a 4G home router. EE's 4G Home Router can give average speeds of more than 30Mbps, which is faster than many standard broadband connections.

Marc Allera, CEO of BT’s Consumer division, said: “In the last few years, our investment across Scotland has resulted in a huge increase in rural mobile coverage. These new 4G mast sites have brought coverage to parts of the country that were previously unconnected. People living in and visiting rural parts of Scotland are now increasingly able to access this essential part of modern life.

“But there are still major challenges to building masts in very rural areas. The UK government’s Shared Rural Network plans should help us reach some of these final not spots. As part of that, we will share the benefits of EE’s investment in Scotland with other operators, and ensure that everyone benefits from improved coverage and choice. But it’s important also that planning rules for mast building are improved to make the process less complex and time consuming. This is a real issue in Scotland.”

Paul Wheelhouse MSP, Scottish Government Minister for Energy, Connectivity and the Islands, said: “Thanks to this very significant investment and work carried out by EE, which we warmly welcome, many people in Scotland’s most hard-to-reach areas will by now be able to benefit from dependable and fast mobile speeds for the first time and this investment also benefits the many tourists and business travellers coming to Scotland, too.

“While telecommunications is, for now, a responsibility of UK ministers, further improving mobile coverage is vital to achieving the Scottish Government’s ambition to make sure everyone in Scotland has access to high-speed, reliable coverage. Much of that ambition will be realised thanks to our investment of £25m Scotland’s 4G Infill or S4GI programme to deliver 4G infrastructure and services in selected mobile ‘notspots’, which the people of New Luce in Wigtownshire recently benefitted from when the first 4G Infill mast in Scotland was connected. Many more S4GI masts will follow as we seek to address notspots in partnership with key mobile network operators such as EE.”

EE’s ongoing investment in rural masts will also provide coverage for the new Emergency Services Network – to be delivered by EE – which will connect 300,000 UK emergency services personnel.

EE Coverage in other rural parts of Scotland:

EE’s ongoing investment in rural masts will also provide coverage for the new Emergency Services Network (ESN) – to be delivered by EE – which will connect 300,000 UK emergency services personnel. The EAS programme is responsible for providing ESN coverage in the most remote and rural areas of Great Britain by building a new network of masts. These sites are in addition to those new sites being provided by EE. EAS will extend ESN coverage and transform mobile working for police, fire and rescue, and ambulance crews in the most rural or remote areas of Britain.

EE runs the UK's biggest and fastest mobile network, offering superfast 4G in more places than any other operator. EE brought the first 4G network to the UK in October 2012, and launched the UK’s first 5G network in May 2019.